michel bauwens interview: what is peer to peer?

here is a 4 min. interview with the p2p foundation’s michel bauwens, centred around the question what is peer to peer?, that i just finished editing. the full length 20 min. interview is featured in this robin good article. the music used is the cc-licensed track my piano sings (part 2) by john holowach from his archive.org hosted album piano works.

while i think the end result is quite acceptable in terms of technical quality, i just want to mention that the original audio recording was not ideal from an editor’s point of view and that i also only had a lower resolution version of the original video to work with… well, this was a no budget production and so compromises had to be made.

i opted for hard cuts only (exception the dissolves for the titles) and since there was just this one camera angle those cuts are all jump cuts. i think it works quite well, still it might appear a bit experimental to some people, but i think after a minute or so one adapts to the slightly unusual style. i could of course have easily added (quick) dissolves, but somehow did not want to do that. dissolves tend to be overused, specially in broadcast tv where there is often not enough time for an editor to make cuts really work… and i admit it: i just love jump cuts – my most radical attempt at jump cut editing so far is my his girl friday – between the lines edit (2005), this one is an 8 min. jump cut orgy (those few dissolves you can see are from the original footage).

the embedded flash video *) by the way is from the internet archive – yes, archive.org now also offers youtube style flash video next to the download option! it’s still in beta and sometimes the video takes too long to load, but i’m sure that they will eventually fix that.

• you can “activate” the flash option for older uploads via “Edit item” > “You may also visit the Item Manager” and then “derive” (third button from the top). after a few minutes you should see the flash version of your video… for all new uploads the flash video is derived automatically from your upload.

• once you hit “play” there is a blue “?” underneath the video – if you click that you’ll get another page that shows the code for embedding the video in a blog post – i did just that for the michel bauwens interview – 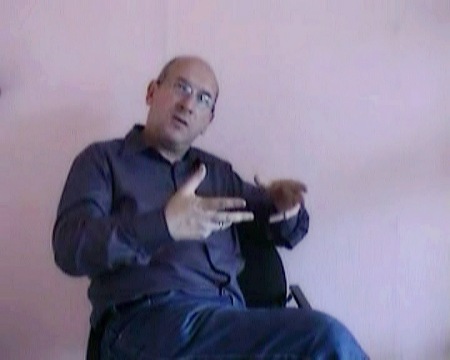 *) wordpress.com unfortunately does not support embedded flash video from the internet archive at this moment

This entry was posted on Wednesday, May 9th, 2007 at 2:46 pm and is filed under editing, flash, internet archive, interview, jump cut, p2p. You can follow any responses to this entry through the RSS 2.0 feed. You can leave a response, or trackback from your own site.